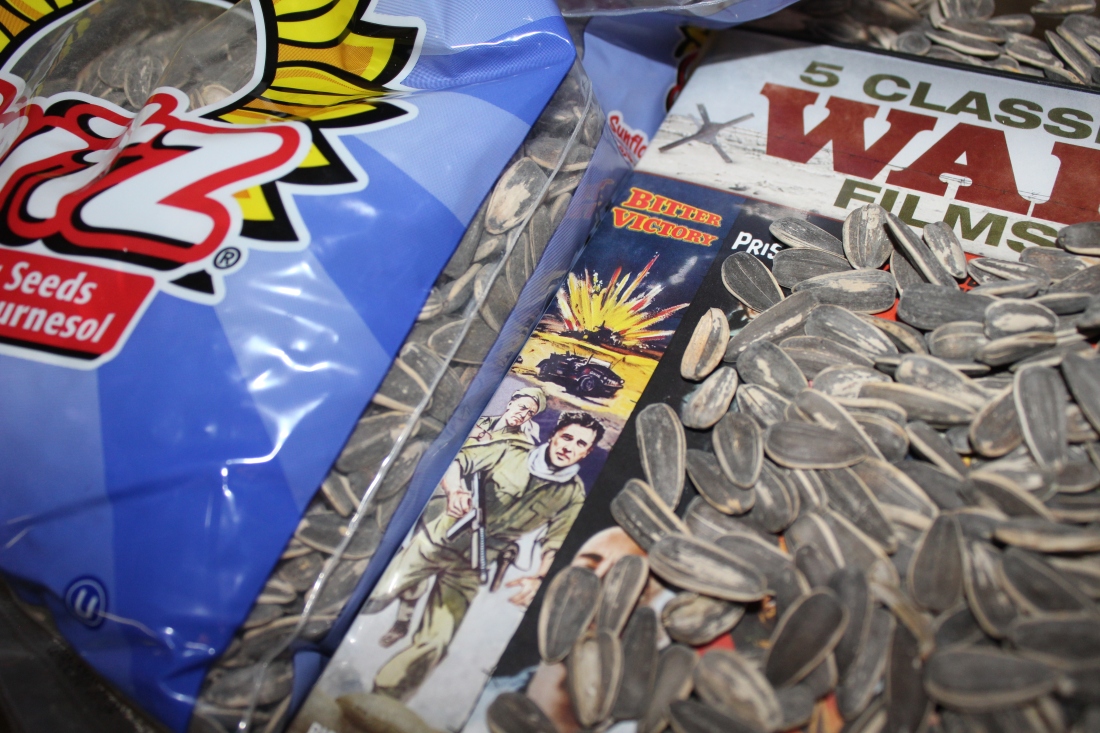 One of the most interesting things about Mill Creek Entertainment’s “5 Classic War Films” DVD is that the majority of its content is pretty subversive in nature.

Sure, something like Commandos Strike at Dawn (1940) is pretty clear-cut military propaganda, but entries like The Prisoner (1955) and Castle Keep (1969) are openly anti-war stories that showcase just how absurd and dehumanizing these protracted conflicts can be.

That’s a pretty impressive ratio considering that this product is designed to be sold to a decidedly older and more conservative demographic.

Nicholas Ray’s Bitter Victory (1957) operates on largely the same subversive level, and does a great job of disguising its real message by presenting viewers with visceral violence and potent melodrama on the surface.

The film stars Richard Burton and Curd Jürgens as two very different British officers in World War II, who are tasked with leading a raid on a Nazi outpost in Benghazi to retrieve some top-secret documents.

Of course, the operation doesn’t go exactly as planned, and the two men butt heads as their squad is forced to retreat across the Libyan desert to safety.

To make matters more complicated, Burton’s character previously had an affair with the wife of his superior officer (Jürgens) which drives an even larger wedge between them.

The aforementioned clash of personalities between Burton and Jürgens is the absolute highlight of the movie, both from a writing and acting perspective.

The two characters are diametrically opposed in virtually every way except for the fact that they both wear a uniform, and screenwriters Ray, René Hardy, and Gavin Lambert do a great job of illustrating that fact to the audience.

Five minutes into the movie it becomes abundantly clear that Jürgens’ Major Brand is a careerist in the military, who is much more interested in handing out orders and appeasing his superiors rather than getting his hands dirty.

In fact, it’s quickly revealed that Brand has been relegated to a desk throughout most of his career, which doesn’t inspire much loyalty in his men when he’s expected to lead them behind enemy lines.

Conversely, Burton’s Captain Leith is an experienced academic and field researcher who speaks multiple languages and actively volunteers to go on this into a dangerous mission, rather than waiting to be told.

Plus, Leith’s compassion for the well-being of his fellow soldiers (and even some enemy combatants) easily eclipses Brand’s indifference to anybody who isn’t his wife.

This sounds like basic stuff on a scriptwriting level (and it is), but that solid foundation is taken to a whole new level thanks to Burton and Jürgens themselves. 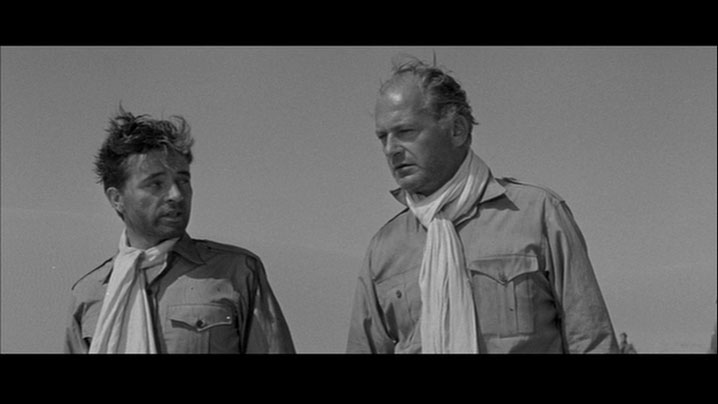 Outside of fully committing to their respective performances, these two actors also provide enough nuance and complexity to prevent their characters from coming across as broad stereotypes.

While Major Brand is cowardly and definitely not fit for command, you can’t help but feel sorry for him since Jürgens’ 1000-yard stare hammers home the idea that he knows he is way in over his head.

And even though Captain Leith is much more capable under fire, he does not come across like a stoic badass cut from the same cloth as Sgt. Rock or John Rambo (from First Blood: Part Two onwards at least).

In fact, Burton has this sorrowful look on his face every time he’s forced to commit an act of violence, which does a better job of highlighting the film’s anti-war themes than a lengthy monologue ever could.

Unfortunately, the same praise can’t be dished out for a lot of the film’s supporting players, who kind of fade into the background in order to make room for the two towering leads.

This is a real shame, since the cast is full of talented English actors like Christopher Lee (yes THAT Christopher Lee) who only get a few lines before they are shuffled off to the side.

However, maybe the disposable nature of all these secondary characters was by design.

After all, the filmmakers are really preoccupied with showcasing how these lower ranking soldiers are often forced into situations where they have no choice but to be sacrificial lambs so that officers like Major Brand can complete their objective and get a promotion.

Outside of the violent deaths that occur in the film’s main action sequences, Ray and his fellow screenwriters communicate this theme through much subtler means thanks to key strategic visuals.

One of Bitter Victory’s strongest lasting images is the practice dummies that litter the opening and closing of the film, which serve as stand-ins for the nameless soldiers who are simply used as pawns by the uncaring military machine.

Of course, clever visuals can’t make up for some of the film’s more noticeable blemishes, like little production shortcuts that come hand-in-hand with such a modestly budgeted war movie.

For example, even though Brand’s squadron is supposed to air drop behind enemy lines, all the audience sees is a quick dissolve edit and a group of men packing up their parachutes on the ground.

I get that the filmmakers probably didn’t have the technology to properly capture a real HALO jump in 1957, but the least they could have done is spring for some cheap military stock footage.

And although this might be an unfair gripe, one of my biggest pet peeves in older movies is when characters get shot and they have to clutch their chest dramatically to make up for the obvious lack of an entry wound.

Again, I understand that squibs were not widely used in movies at that time, but this style of production always takes me out of a movie no matter how it is shot.

Outside of those small quibbles, Bitter Victory is still a hell of an engaging war movie that works on a variety of levels.

For those who just want to sit back and enjoy an old-school, men-on-a-mission type story with a love triangle sprinkled in, Ray and his fellow scriptwriters have you covered.

But if you want to dig a little deeper and find a film that is all about sticking up for individuals who are suffering under the thumb of an authoritarian institution, there’s still a lot to chew on.

This film also serves as a great follow up to Stanley Kubrick’s Paths of Glory, which tackled nearly identical themes from that same year.

In fact, the only group who wouldn’t enjoy Bitter Victory is the masterminds behind the modern military-industrial complex, since they would realize that people have been on to their shit from the very beginning.

Spitz Sunflower Seeds (because you chew them up and spit them out, the same way that the upper brass treat lower ranking soldiers in this movie) 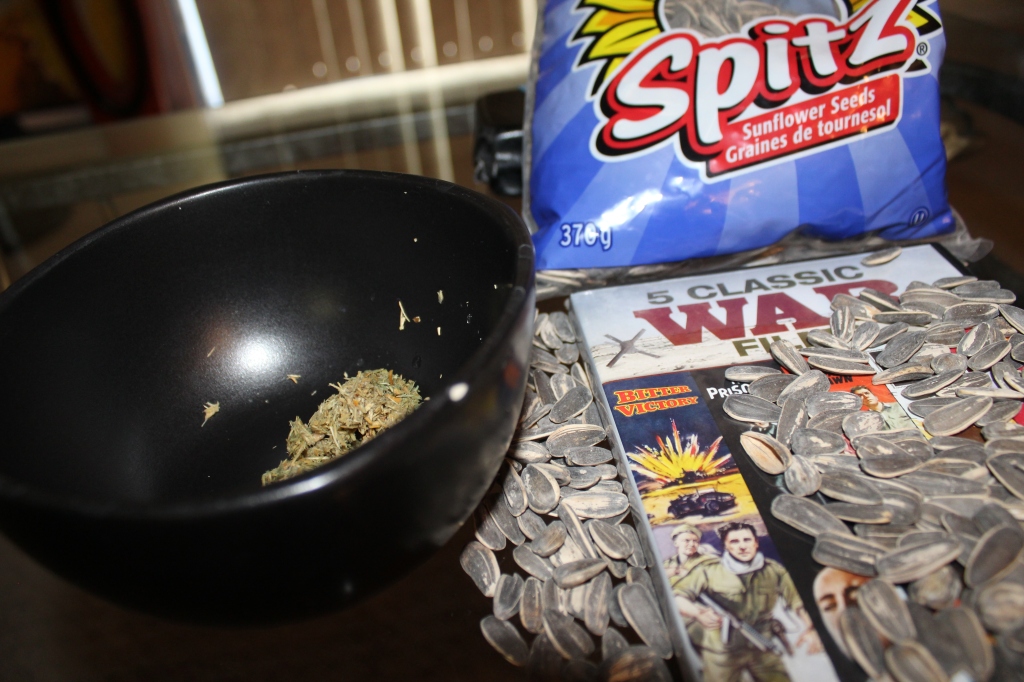 –Bitter Victory is an adaptation of the book Amère Victoire written by the film’s co-writer, and WWII-era French resistance fighter, René Hardy.

-Nicholas Ray’s biggest claim to fame before helming Bitter Victory was directing James Dean in Rebel Without a Cause (1955).

-This film was nominated for the Golden Lion award at the 1957 Venice Film Festival, but lost to Satyajit Ray’s Aparajito (the second part of his famous Apu Trilogy).

–Bitter Victory features two future Bond villains in its cast: Christopher Lee would go on to portray Francisco Scaramanga in The Man With the Golden Gun (1974) and Curd Jürgens became Karl Stromberg in The Spy Who Loved Me (1977).

-After serving a supporting role in Bitter Victory, Christopher Lee starred as The Creature in Hammer Studios’ The Curse of Frankenstein during that same year. In 1958, Lee hit the big time by taking on the lead role in Hammer’s Dracula and would go on to star as the horror movie icon another eight times.