Sometimes I feel bad for Sarah Jessica Parker, since she still gets a lot of shit for easily her most iconic role.

Ever since Sex and the City went off the air in 2004, she’s been subject to a seemingly endless stream of think pieces and hot takes about how Carrie Bradshaw is such a bad protagonist; someone who is immature, materialistic, and completely self-absorbed.

This wasn’t helped by the series’ subsequent two big screen adaptations, which arguably made every character on that show look bad by taking their most negative qualities and pumping them up to 11.

However, after sitting through the 1996 romantic comedy If Lucy Fell, I think its safe to say that Parker’s more famous turn as a quirky New York City socialite on HBO could have gone a lot worse.

In this film, Parker plays the titular character of Lucy, who feels unfulfilled in love despite the fact that she has an amazing job (a therapist) that gives her enough disposable income to live comfortably in one of the most expensive cities in the world. Sound familiar yet?

But rather than unloading her anxiety on a trio of girlfriends, in this story Parker vents her frustration to her artist roommate and best friend Joe (played by Eric Schaeffer) who’s suffering from similar bouts of romantic frustration.

As the film starts, the pair come up with a solution that’ll fix both of their current predicaments: if they don’t find true love by the end of the month, they’ll both jump off the Brooklyn Bridge and kill themselves.

No, you read that right. You haven’t experience a stroke. The entire foundation of this alleged “romantic comedy” is built upon a death pact that’s initiated because two well-off, highly educated people are mopey that they haven’t found an intimate life partner by the time they turn 30.

It’s a shame that the phrase “first world problems” wasn’t popularized until much later after the movie’s release, because critics at the time could have easily summarized their reviews of this turkey by using those three simple words.

Now, to be fair, this premise could have been salvaged if the filmmakers were self-aware of their shallow premise and the movie was conceived as some kind of dark satire about how seriously some people take the New York City dating scene.

Unfortunately, these characters are played completely straight, which turns them into complete sociopaths.

For example, for someone who is supposed to be a therapist in a professional setting, Parker’s Lucy is completely inconsiderate of people’s feelings in her dating life, since she callously rejects potential suitors before she gets a chance to know them.

Even her attitude towards seemingly platonic friends is questionable, since I’m pretty sure that a licensed shrink shouldn’t, under any circumstances, joke about wanting to kill themselves.

Meanwhile, Schaeffer’s Joe comes across as being an unhinged, creepy stalker, since he’s constantly peeping on his hot neighbour and paints portraits of her as she walks around in her underwear.

There’s an extra layer of “ick” added to Joe’s storyline when you realize that Schaeffer served as the film’s writer, director and producer, which explains why a statuesque blonde like Elle MacPherson (the neighbour) would fall for a man who isn’t even remotely in her league in terms of charm, poise or physical attractiveness.

That being said, MacPherson should be commended for taking on the near insurmountable task of pretending to be turned on by Schaeffer’s obnoxious brand of 90s stand-up comedy when they start getting intimate.

At least when Woody Allen pulled this shit back in the day he had some good writing to back up his auteur narcissism. Schaeffer’s idea of a meet-cute scene involves inviting his love interest to an art gallery and greeting her with the line “I have herpes.”

Even though Parker’s courtship with a dreadlocked buffoon (Ben Stiller) doesn’t make your skin crawl, it’s still really boring, mostly because you know that it isn’t going anywhere.

Within the first 10-15 minutes of the runtime, anybody with a brain would be able to predict that (SPOILERS) Parker and Schaeffer are going to end up together in the end, since they both eventually realize that the soul mate they’ve been looking for was in front of them all along.

I could go on and on about the movie’s adherence to other romantic comedy clichés, including half-baked physical comedy, a script full of fortune cookie wisdom that’s passed off a deep psychological insight, and an indie rock soundtrack that immediately dates the movie by two decades.

But I think the main reason why this film doesn’t work can be boiled down to the two mains leads, who are so repulsive and unlikable that you would rather watch them carry out their suicide pact than be a passive observer in their shallow pursuit of true love.

Say what you will about Sex and the City, but at least it used the backdrop of the New York dating scene to (occasionally) push boundaries and explore ideas that had never been discussed on TV before.

With If Lucy Fell, all the director brings to the table is his ego and desire to get laid, which he should have relegated to a personal diary entry or some kind of unpublished fan fiction.

(Speaking of personal logs, I am aware that Sex and the City already has a prequel in the form of The Carrie Diaries, but I haven’t gotten around to watching it … yet).

Sour Patch Kids (because you’ll be making that same kind of face throughout this entire cringefest anyway). 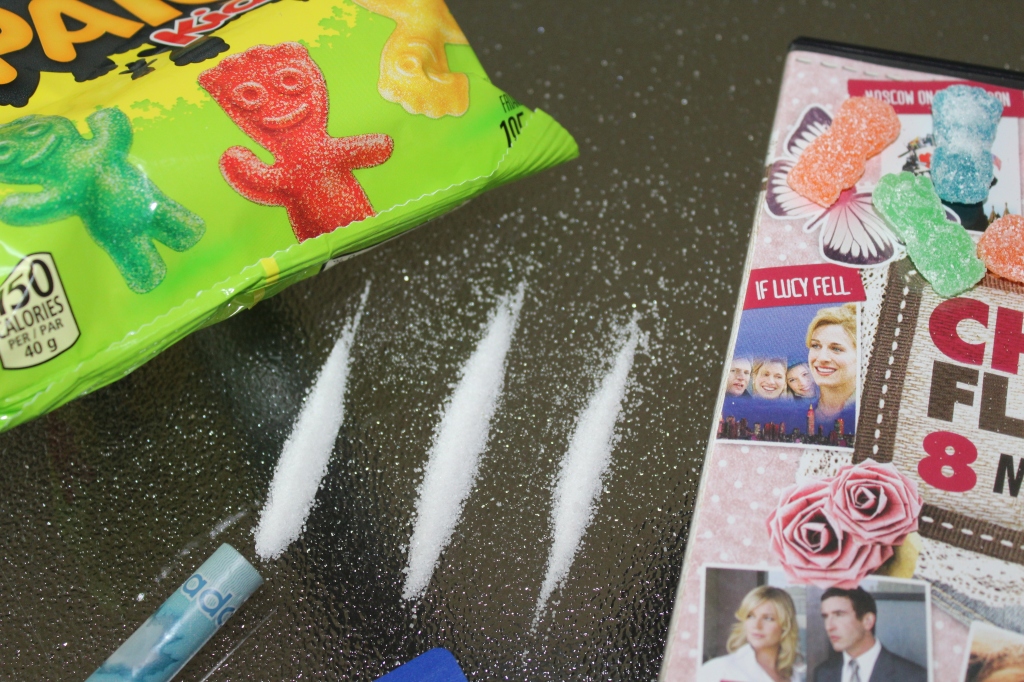 -I noticed a weird reoccurring pattern scrolling through Eric Schaeffer’s IMDB page, since he’s attached himself to several projects that include the word “fall” or allude to the act of falling in the title. These include: If Lucy Fell (1996), Fall (1997), Mind the Gap (2004), Gravity (TV series, 2010), and After Fall, Winter (2011). I don’t know if this is indicative of some kind of weird fetish that’s manifesting in his creative pursuits, but I’ll let you make the call.

-Unexpected cameo: A 12-year-old Scarlett Johansson has a small supporting role as one of Schaeffer’s students in his art class.

-The entire soundtrack for If Lucy Fell was provided by the indie rock band Mary Me Jane, whose involvement in the production gave them enough clout and leverage to produce their first studio album with Sony in January 1996.