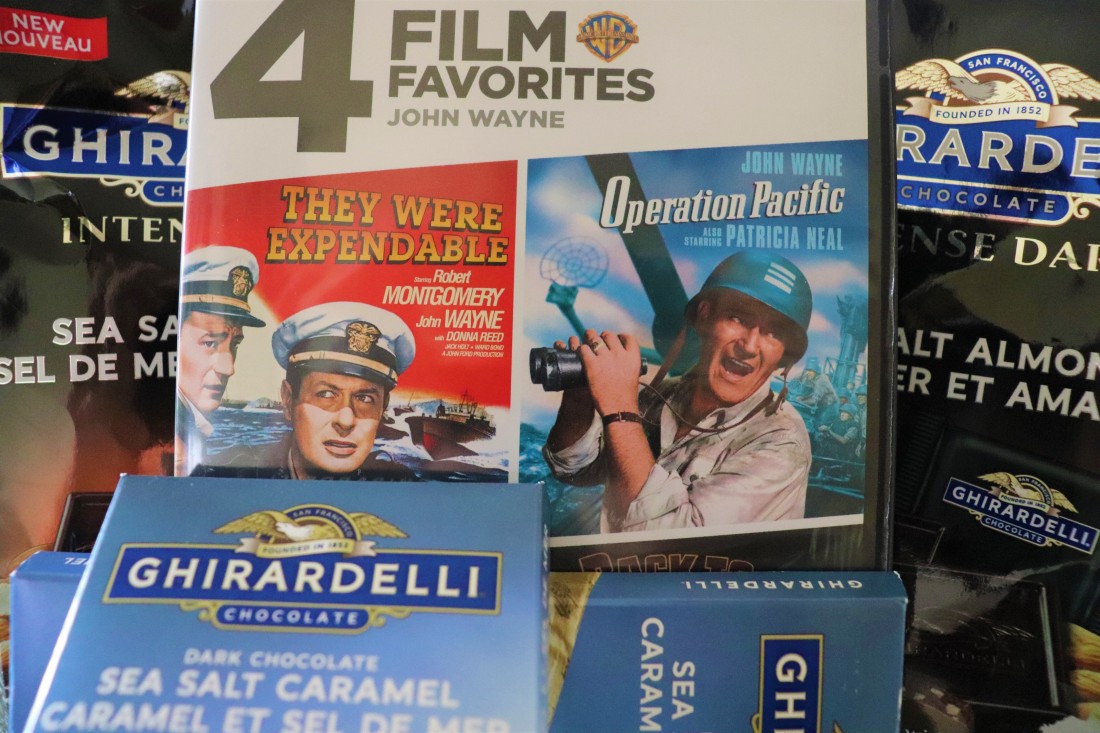 This John Wayne-led naval adventure is much more celebratory and easy-going in tone, clearly riding off the protracted high that many Americans were still feeling since World War II ended six years earlier.

As a result, the film is a lot more interested in exploring what a soldier’s life might be like after “the fight” comes to an end, rather than providing some insight into what this specific conflict looked like in a larger context.

Even though this tone might upset some military diehards, Operation Pacific actually benefits from the gift of hindsight, since it doesn’t get completely bogged down in the cynical saber rattling that kneecaps so many other war films of that era.

The plot of Operation Pacific revolves around Duke Gifford (Wayne), who serves as an executive officer aboard a submarine called the USS Thunderfish during World War II.

After returning from a dangerous mission in the Philippines, Duke runs into his ex-wife Mary Stuart (Patricia Neal) while on leave at Pearl Harbor.

Even though the two still have feelings for each other, Duke’s responsibilities as a naval officer keep getting in the way of his romantic advances toward Mary, especially as his patrols in enemy waters get increasingly treacherous.

Now, some of you might be scratching your heads after reading this plot synopsis, since this sounds more like a Nicholas Sparks novel rather than a gritty war epic starring John Wayne.

This element caught me by surprise as well, since lengthy sections of the film are dedicated to Wayne and Neal making doe eyes at each other, while a lot of the naval combat scenes are pushed to the sidelines.

Operating Pacific also goes out of its way to depict the more blasé and uneventful aspects of military life that border on the comical, some of which wouldn’t be out of place in an Abbott and Costello movie.

In one scene, while on shore leave, Wayne is tasked with bailing his men out of a Honolulu jail after they get into a drunken brawl with some local police officers.

When the crew is at sea, they use some of their down time to screen a movie in the submarine’s mess hall.

And after rescuing an infant from enemy territory, the men of the USS Thunderfish figure out how to feed the child using a rubber glove.

While these moments do tonally clash with the naval combat scenes—which are awash with gunfire, explosions and technical mumbo jumbo — they do add some much-needed variety to what would otherwise be a pretty by-the-numbers war movie.

And by shifting the film’s focus away from the “battlefield,” Waggner (who also wrote the screenplay) is very clearly trying to appease a post-World War II audience, whose appetite for outright bloodshed had definitely cooled after six years of peacetime. *

Plus, by 1951 the US Baby Boom was noticeably underway, with the romance between Wayne and Neal in this film serving as an obvious nod to the kind of cathartic, romantic energy embodied in classic wartime imagery like Alfred Eisenstaedt’s “V-J Day in Times Square” photograph.

In fact, this film is so uninterested with broader conflict itself that there’s not really any main antagonist to speak of.

Sure, Wayne has to butt heads with a fellow soldier who is also after his ex-wife’s affections, but their relationship is always very cordial and never escalates beyond a harsh word.

Because of this, most of the film’s charm comes from its quieter moments, where the main characters hang out and discuss what life is like back on dry land.

That being said, Operation Pacific does slightly buckle under some clichés that one would expect from a Hollywood war epic from that era.

For one thing, a lot of the film’s action sequences rely way too heavily on stock imagery, which isn’t spliced into the director’s original footage in an organic fashion.

Additionally, Waggner is pretty upfront about presenting this story as a piece of military propaganda, opening up the movie with a Star Wars-style crawl that pays tribute to those who lost their lives in the line of duty.

While there’s nothing wrong with this kind of cinematic remembrance, it does set the tone for a movie that casts World War II in an overly simplistic light, where all American soldiers are depicted as being absolute paragons of virtue.

This approach to characterization turns into a problem whenever the movie veers off into a territory that isn’t morally black and white, like the aforementioned moment where Wayne has to bail his men out of jail.

Even though these characters assaulted several police officers under the influence of alcohol, this scene is largely played for laughs, where the crew is ultimately left off the hook for committing such a serious crime.

This uncritical eye is prevalent throughout the rest of the movie as well, since the filmmakers don’t provide any insight into the Imperial Japanese Navy, outside of the fact that they are a mostly faceless enemy who must be defeated.

Thankfully, this outdated propaganda isn’t so heavy handed that it ruins the movie, although everyone’s mileage may vary (especially if you don’t care for the term “Japs” being thrown around in casual conversation).

And even if you’re not a big fan of romance being mixed in with your violent war movie, at least take comfort in the fact that Waggner does a pretty decent job of balancing those two elements throughout the film’s 111-minute runtime.

Plus, in this case, the relationship between Wayne and Neal actually saves Operation Pacific from being completely irrelevant to a 2021 audience.

After all, [SPOILERS] their successful reconcilement at the end of the movie is obviously meant to tap into America’s desire to return to some state of normalcy after a long period of societal upheaval.

And in that respect, Operation Pacific has become way more relatable than ever in the seven decades since its original release now that the country (and North America more broadly) is turning the tide in the fight against COVID-19. **

-Retired US navy admiral Charles A. Lockwood served as a technical advisor on Operation Pacific to ensure its accuracy when depicting submarine warfare. According to Wikipedia, Hollywood producers sought out Lockwood a couple more times to advise them on a variety of other film projects, including Hellcats of the Navy (1957), On the Beach (1959), and Up Periscope (1959).

-Near the finale of Operation Pacific, the men of the USS Thunderfish can be seen exchanging film canisters with a friendly American sub so that both crews can enjoy a movie night. These films, Destination Tokyo (1943) and George Washington Slept Here (1942), were both produced by Warner Bros. Pictures in real life.

-Following the release of Operation Pacific, George Waggner mostly directed television for the remainder of his career, including episodes of The Green Hornet, Maverick, The Man from U.N.C.L.E. and Batman.

* I realize that the US was involved in the Korean War by 1951, but that conflict wasn’t nearly as pervasive in American society as World War II was, so I think my original point stands.

** I sincerely hope this statement doesn’t become extremely dated in the coming weeks and months.